This Article is written by FCHS senior, Brandon Cowen.

If anyone knows anything about my group of friends, they know that we love to go bowling. This past Monday night, we found ourselves at the Oxford Bowling Lanes.   As FCHS Junior, Hunter Tscheann, and I were walking into the bowling alley, we were stopped by a man. He asked if we were students at Franklin County High School. He then proceeded to tell us how his son, Kanon Whittamore, is a huge fan of Hunter Tscheann. He expressed to us how his son always loved watching Hunter carry the football for the Wildcats every Friday night.

Mr. Whittamore gave us his address and told us we should stop by to see Kanon.  He expressed how much this would make his day.  This past Tuesday, around 3 pm, Hunter and I went to go see Kanon. We were met by his parents, Shane and Aleese.  They called for Kanon to come downstairs. Kannon was confused to see high schoolers standing in his living room. Mr.  Whittamore told him who Hunter was and Kanon was so surprised. He was speechless and didn’t move.

With a little help from our Athletic Director, Denny Dorrel, we were able to give Kanon some FC gear and apparel as well as take some pictures.  Kanon is a 1st grader at Brookville Elementary. He plays football for Franklin County and is the safety for his team. I want to thank the Whittamore’s for letting us meet their son. This is a moment Hunter and I will never forget. 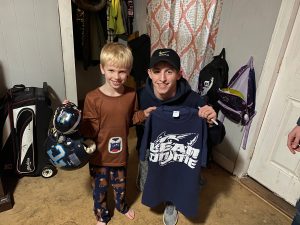 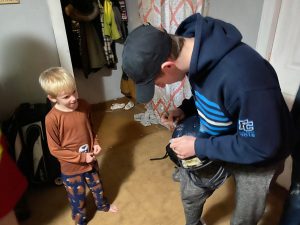